Trending News: India is celebrating 75 years of Independence and under the banner of Azadi Ka Amrit Mahotsav, several events and campaigns have been organized for over the last 75 weeks to celebrate independence and the glorious history of India’s people, culture and achievements.Also Read – India Celebrates Azadi Ka Amrit Mahotsav, Iconic Buildings Lit Up In Tricolour | Top Points

The Ministry of Culture organized major events marking the grand celebration. As a part of the Mahotsav, the ministry has chosen 75 Cultural Brand Ambassadors from different parts of the country, one of them being playback singer, songwriter, and viral sensation Pranav Chandran. Also Read – Independence Day 2022: Indore Sets World Record For Largest Human Chain Forming India’s Map

Pranav, who is said to be one of the most trending and dynamic performers of this generation, shared his excitement about receiving the honor in an Instagram post. He also shared pictures and videos from the award ceremony where he was chosen as one of the 75 Cultural Brand Ambassadors of India. 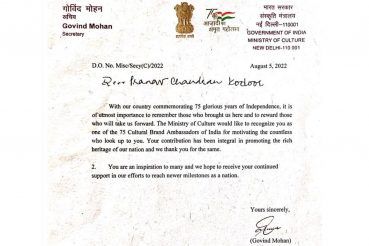 Pranav Chandran is a YouTube sensation and has overall more than 250 million views on YouTube and Music streaming platforms. His most viral song is the recreation of Kya Hua Tera Wada which has now crossed 83 million views and overall 300 Million+ across YouTube and other platforms.

He got his first break by singing ‘Aa Dekhe Zara’ for the Hindi dubbed version of the mega movie Avengers Infinity War.

He got an opportunity to do official recreation of 90’s hit song Raja Ko Rani with Venus Records which was aired across Television and Radios. He is also signed with Saregama Music and Zee Music Co. He was associated with Pehchan Music since the inception of the channel and has helped them influence the target audience of 6 million subscribers.

His original Yeh Dooriyan in collaboration with the Srilankan Fame Music composer Chamath Sangeeth (Manake Mage Hithe), has become one of the highest viewed songs and has also featured on the BBC Asia network.

He also sang for a multilingual movie called – JILKA, which was released in Kannada, Hindi, and Marathi.

He was also a finalist in MTV Colors of Youth.