Bhubaneswar: As the state grapples with the worst flood situation since 2011, over 4.67 lakh people in 1,757 villages in 10 districts of Odisha have so far been affected by the massive flood triggered by rainfall. The officials said on Wednesday that the flood situation in the Mahanadi basin continues to be grim. To add to the woes of the afflicted people, the meteorological department has predicted heavy to very heavy rainfall in several districts of the state in the coming two days. All the government and private schools in Puri have been closed for two days — August 17 and August 18 in view of the flood.Also Read – Odisha Rains: Around 100 Houses Submerged in Sambalpur as Water Released From Hirakud Dam | PHOTOS

Despite a stoppage of rain for the past three days and a fall in the water flow at the Mundali barrage near Cuttack, the flood situation remained grim in the Mahanadi basin system in Odisha. The Special Relief Commissioner (SRC) PK Jena informed that a total of 4.67 lakh people in 10 districts have been affected due to the floods. “Due to heavy rainfall and subsequent floods, over 2.5 lakh people in 425 villages have remained marooned while,” said SRC, PK Jena. “Over 60,000 people have been evacuated to safer places. Cooking food is being served to the evacuated people at different shelters,” Jena added. Also Read – Odisha: Flood Situation in Jajpur, Kendrapada districts Continues to be Grim 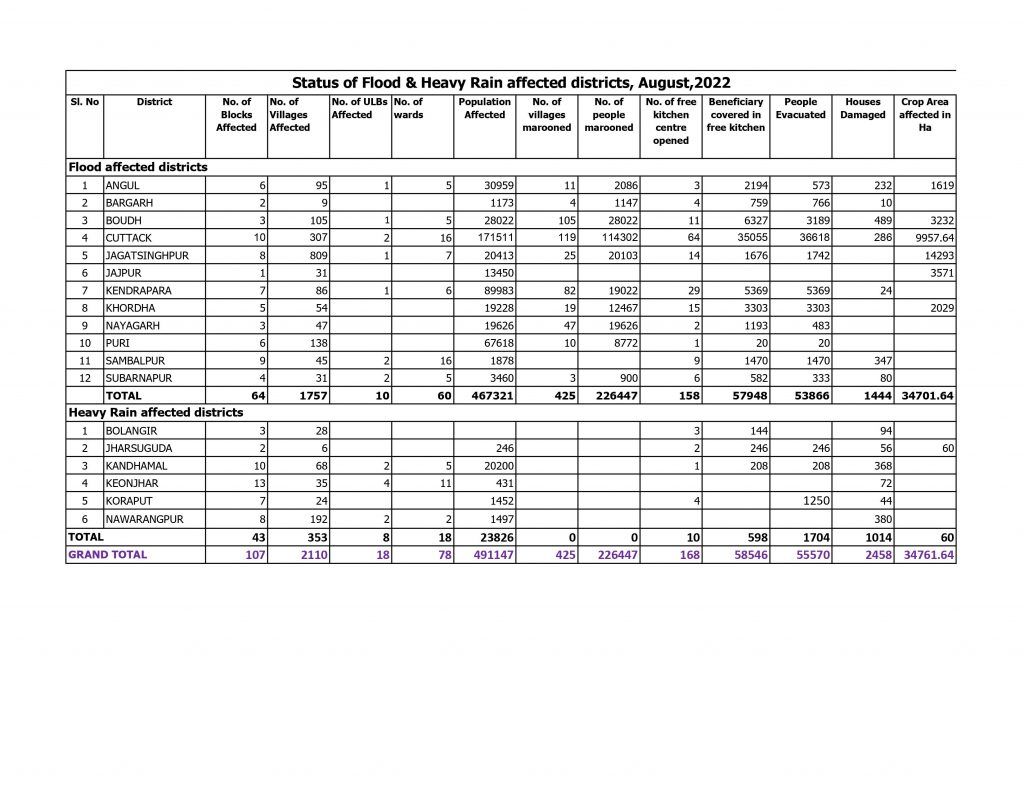 Odisha districts affected by floods as of August 17, 2022.

For the first time after 2011, Odisha is experiencing such a high-level of water flow in the Mahanadi system at Mundali. The peak flood is now passing through low lying areas of Cuttack, Jagatsinghpur and Puri districts. “Water flow will start reducing from tomorrow morning,” Jena said. “This night is crucial when the peak flood will pass through and reach the sea. Following which, the water level will further recede,” he added.

Holding a review meeting, Odisha Revenue Minister Pramila Mallick asked the Keonjhar, Bhadrak, and Jajpur district collectors to remain on alert for another fresh low pressure likely to be formed over the north Bay of Bengal on August 19.